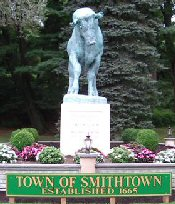 The Statue of Whisper the Bull

In 1903 Lawrence Smith Butler, a descendent of the town founder Richard Smith, proposed the idea of a bronze statue to his friend sculptor Charles Cary Rumsey. Butler believed that money could be raised to pay for the project and a price of $12,000 was agreed upon for the completed work. In 1923, the casting was complete and ready for shipment. However, the funds were not raised and the statue was not shipped to Smithtown. It sat instead in front of the Brooklyn Museum for a number of years before being placed into storage.

In 1941 Butler renewed his quest. He convinced the Town Board to build a concrete pedestal to hold the statue, raised the $1,750 needed to cover the cost of the move, and convinced Rumsey's heirs to donate the statue to the Town.

First by truck, then via railroad, and then by truck once more, the fourteen-foot, five-ton bronze bull made its journey to Smithtown. On May 10, 1941, Mary Rumsey, daughter of the sculptor and wife of New York Governor W. Averill Harriman, presented the statue to the people of Smithtown.

For more information regarding the history of Smithtown , please visit the Smithtown Historical Society website.

View a slideshow of historic buildings in Smithtown.